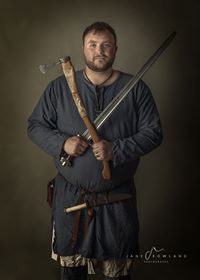 Born 845 to Trygva Ivarson, a landowner and Astrid Jerriksdottir. Arn was third son and felt he could never escape the shadows of his older brothers, Wulf and Erik.

Arn knew he would not inherit and knew he had to make his own name. A capable hunter and warrior, in 865 Arn knew his cousin Gunnar was planning to leave, so he gathered his meagre belongings and his father’s fighting axe and went with him.

Drinking and fighting their way west, the pair gained notoriety, Arn for his drinking and Gunnar for his wit and both for their battle skills. It was Arn, who in a night of drunken revelry, split Gunnar’s shield with his axe, earning Gunnar the name of SplitShield.

Arn stood with Gunnar when he married Ljufa Brundottir in Kaupang.

Upon arriving in Tønsberg Arn and Gunnar met the warrior Bjorn, who bore a striking resemblance to Gunnar. After talking the pair found out he was the bastard son of Sigurd, Gunnar's father. After discoving this revelation Bjørn decided to join Gunnar and Arn in future battles. The three men vowed to fight side by side.

Learning his hunting skill and weapon craft from his grandfathers, Ivar Valdarson and Jerrik Ulfson, themselves a great warrior and hunter respectively.

During a hunting trip from Tonsburg, Arn mistook a fellow hunter for a dear in a bush and shot at him. Only striking the man's seax sheath. Luckily, Rolv Eirikson, saw the funny side of it and they continued to hunt together. They quickly struck up a friendship, Rolv's calculated nature been a counter balance for Arn's often drunken state. It was from Rolv that Arn learnt of Magnus Gunnarson preparing ships to sail to England, and there was space for himself, Gunnar and Bjorn.

Arn was gifted his sword by Magnus in recognition for his ferocity and loyalty to his cousin who he defended when he was injured in battle.

Arn, Gunnar and Bjorn were with Magnus when he set sail to meet the Dane fleet to cross the seas to the West. Upon reaching England, Arn, Magnus and the other Warriors joined the rest Great Heathen Army were sucessful in capturing Jovik after defeating the Northumbrian army.

Arn has been a friend and close companion to Magnus ever since, making his Jarl laugh at every opportunity.

Arn loves a fight almost as much as he loves a drink, happily going into battle drunk in blood and ale!